It has been a while since publish anything but I’m back with a passion. In October I was on vacation which is always an opportunity to get inspired for new projects. I have decided to kick off where I left off in Afghanistan, specifically the treasures of Tepe Fullol.

n many people to traverse the Hindu Kush Mountains and to settle in Northern Afghanistan. This includes a warring tribe of nomads.

In 1978, a series of six tombs, containing a nomadic chieftain and five women was unearthed, in an Iron Age temple. Amongst the items buried with them were 20,000 golden ornaments, many of which adorned their bodies. The site is known as Tillya tepe, literally, Hill of Golden. The opulent jewellery that accompanied these people to the grave indicates two things. One, they belonged to a ruling family. Two, the nomadic tradition of being buried with ones wealth was being followed. Although the style of the jewels are from the Pontic- Caspian steppe region, they show Greek, Roman, Chinese, Indian and Siberian influences . 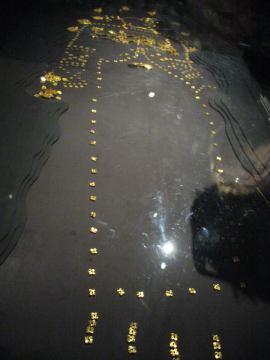 The first tomb contained a woman of 20-30-yrs of age who had gold embellishments sewn into the sleeves and across the chest, with a string of beads sown diagonally down to the waist of her gown.

The second tomb had a 30-40 yr-old woman who was wearing a pair of matching jewelled pendants with gold figures grasping S-shaped dragons and signet rings with images of Athena, the Greek goddess of wisdom. On her head, she wore a conical headdress and her clothes were made of layers of gold embellish cloth. Her tomb also included gold amulets, similar to those that can still be bought in Afghanistan. 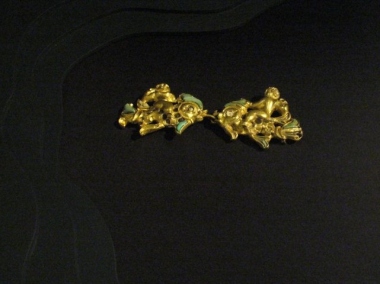 Photo taken on 12/6/14 at Afghanistan: Hidden Treasure exhibit at the Art Gallery of NSW 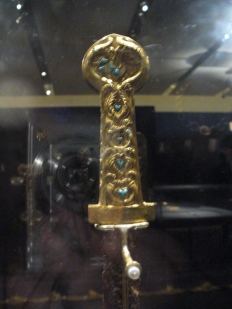 The fourth tomb housed the chieftain who was buries with his weapons, including a gold-hilted sword, implying he was a high-ranking warrior. 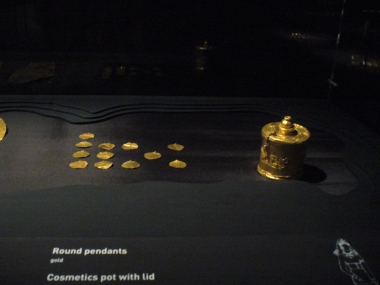 The fifth tomb contained a teenage girl wearing a bracelet of cameos, a gold anklets, necklace, earrings and thin gold shoe soles, meant for the afterlife. There was also a gold sceptre, a silver mirror, in a gold case and Roman coins, minted in early 1stC  A.D. in Gallic Lugdunum (present-day Lyon, France). 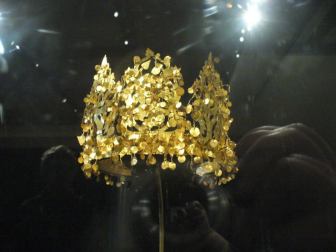 The sixth a woman wearing an ornate crown of many parts, which could be taken apart, earrings , many bracelets and gold sewn in to her dress, coins in mouth, she was holding a spectre. 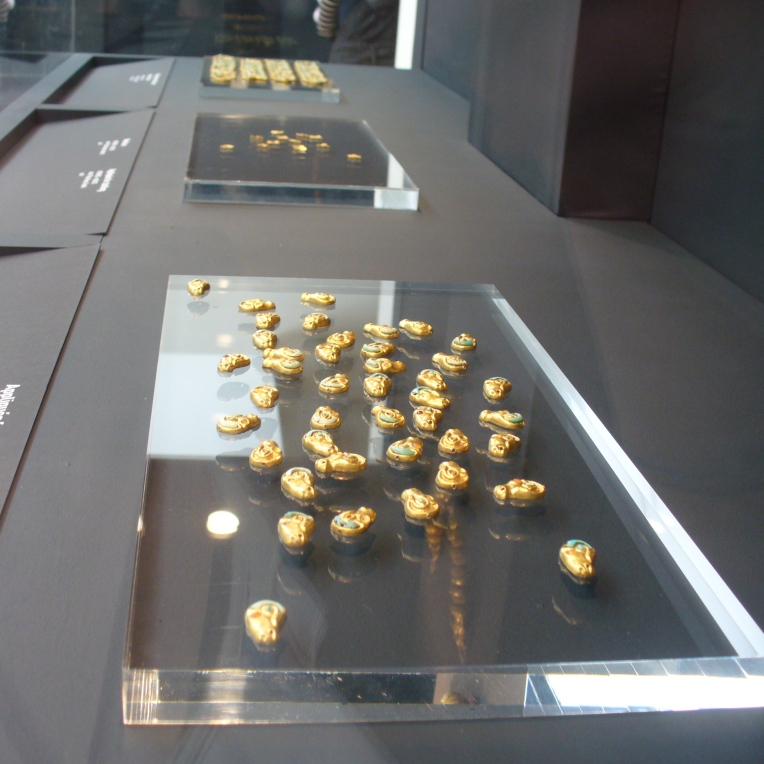 Even though the jewels are thousands of years old, many of the designs look familiar, which shows that similar things attract humans and influence how they adorn themselves. These include a crown of flowers, heart-shaped earrings, dolphins, cherubs, livestock and rings inlaid with semi-precious stones, like turquoise.

Next week I’ll be going to the opposite end of the timeline and looking at up-cycling objects into objects of adornment.