Adornment has always been made from materials people have access to, whether it be wood, animal by-products, stone or metal. In the 20th C, plastics became a major ingredient of jewellery because it was easy to mass produce. However, the combination of the demand for mass production and the sturdiness of plastic has resulted in an access of materials being discarded in to landfill. A different type of jewellery designer has emerged, who takes materials that in their current form have not been conceived for adornment.

Upcycling is the process of taking would-be waste items and converting them into something new. Upcycling is greener than recycling because most of the time the only energy you use is your own.  It’s not a new idea with clothing but up until recently, the only objects repurposed into jewellery was precious stones that were taken from on setting and placed in another.

A quick Google search or a stroll through an artisan markets to see that this isn’t a passing faze. People identify with these items partially for their uniqueness but predominantly people are being environmentally conscious when buying products.

This type of jewellery, like all adornment, has a level of emotional connection with the wearer and conveys a sense of identity. The exhibition “A fine possession:  Jewellery and Identity” featured leis made from plastic pull ties, as well as other plastic objects.

Pendant and ring made from upcycled Nepresso pods 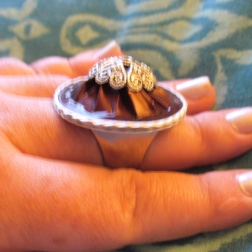 Claudia Martinez-Uhlig, a former- Australian resident, now residing in Peru, is one such artist. At the artisan markets she sold her wares at she was known as the Nepresso lady because most of her pieces were made from upcycling Nespresso pods which are non-recyclable. She has designed rings, pendants, necklaces, earrings and brooches all by compressing, bending, fold, cutting and clueing Nepresso pods. More recently she has cut and reglued pieces of mineral water bottles to a metal band to create a floral ring.