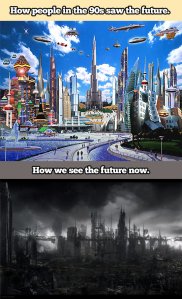 When I first saw this meme I struck by its accurate reflection on our perspective of the future. Although the idea of a future with flying cars and fantastical buildings predates the 1990’s, it wasn’t until the last couple of years of the 90’s that people started having a darker vision of the future.

I think this view changed when people realised that human existence isn’t continually progressing. Many of the scenarios that could undermine the human species include extra-terrestrial invasion, an astronomical event, an robot invasion or a viral outbreak that’s unaffected by medicine; the zombie apocalypse would be included with is. Another scenario is humans exhaust Earth’s resources, making it uninhabitable.

This change of perspective has been reconstituted into popular culture and the mainstream media, including current affairs.Over the last 15 years futuristic films and TV has changed from something like the top picture to the bottom picture.

One of the first tv shows to depict a darker future was Dark Angel, which ran from 2000-2002. The pilot episode starts with scenes set in 2009. Fast-forward 10 years, the world is suffering from a depression that resulted from a technological meltdown. Although there hasn’t been a technological meltdown, the Global Financial Crisis happened in 2008. The land the protagonist inhabits a landscape of the series is reflected in bottom half of this meme.