Everywhere tea is found in the world there is a tea culture i.e.  how it is prepared, consumed and the aesthetic surrounding these acts. In Asian cultures ceremonies have surrounded the consumption of tea for hundreds of years. In Western cultures, predominantly Britain and her colonies, tea culture is more about the tea party and afternoon tea.

In England, women ruled this cultural space. Drinking tea out of fine bone china and eating delicate cakes and dainty sandwiches is still seen as a feminine past time. Tea drinking was introduced to Britain by Catherine of Portugal, wife of King Charles II. The practice of tea drinking was quickly adopted up by the ladies of the court. Anne, duchess of Bedford is credited with creating afternoon tea. When it became common practice amongst the wealthy, young, unmarried, men joined in. In the Victorian tea parties became more accessible to the general public with the opening of the first tea garden, which was a unisex venue. In wealthy households tea was a valuable commodity and was often brewed multiple times as it trickled down the hierarchical ladder of the house.

The Chinese tea ceremony was born as a result of the respect for nature and need for peace. The philosophies of Confucianism, Taoism and Buddhism have blended together giving birth to the Chinese tea ceremony. The traditional tea ceremonies were described as “he” which translates as “peace”, “jing” which translates as “quiet, “yi” which means “enjoyment” and “zhen” meaning “truth”. Eventually, Chinese people came to appreciate tea’s enjoyment and social value.  The Asian cultures are often for being perfectionists and tea ceremonies reflect this. Each tea ceremony starts with preparing in advance the right atmosphere, the necessary tools and especially taking time to prepare your soul for the entire ritual.

Chinese tea ceremonies are performed using small cups to match the small, unglazed clay teapot; each cup is just large enough to hold about two small swallows of tea. First, the teapot is rinsed with hot water, then the pot is filled 1/3 full with tea leaves and boiling water is poured into the pot. The water from the pot is poured into a large bowl. The leaves are then rinsed by filling the pot half full with hot water, then drained immediately, leaving only the soaked leaves. The pot is then filled to the top with hot water, covered and additional water is poured over the teapot which is left to rest on the tea bowl.  The first infusion should be steeped for only 30 seconds. The tea is poured into the cups by moving the teapot around in a continual motion over the cups so that they are filled together. After steeping, the tea can be poured into a second teapot or tea pitcher to be served at leisure. More water can be added to the teapot and up to five infusions can be made from the same leaves. 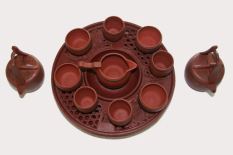 The Japanese tea ceremony , cha-no-yu, chado, or sad,  is performed using powdered green tea, called matcha. The ceremony is hosted by a tea master. The whole process is about aesthetics. One of the main purposes of the ceremony was to appreciation of Chinese paintings and crafts in a serene atmosphere.

Following a silent bow between host and guests, the guests proceed in order to a stone basin where they ritually purify themselves by washing their hands and rinsing their mouths with water. They remove their footwear and enter the tea room through a small “crawling-in” door. Then the host enters the tea room and welcomes each guest. First they have a meal with several courses then the guests temporarily leave the room. The hot places a flower arrangement on the table and invites the guests back in with the sound of  gong and the guests again purify. The host then cleanses each utensil, in a precise order and manner, then places them in an exact arrangement. Then the tea is prepared and the water is heated over a coal fire. The first guest bows to the host and the second guest as he is receiving the tea, then raises the bowl in respect to the host. The guest rotates  the bowl to avoid drinking it from the front, takes a sip, compliments the host on the tea, then after taking a few sips, the guest wipes the rim of the bowl and passes it to the second guest. The procedure is repeated until all guests have taken tea from the same bowl; each guest then has an opportunity to admire the bowl before it is returned to the host, who then cleanses the equipment and leaves the tea room.

This is followed by the host rekindling the fire and adds more charcoal to signal the beginning of the “casual” part of the  ceremony. The host will return to the tea room to bring in a smoking set and more confectionery. The host will prepare an individual bowl of thin tea for each guest. After  all the guests have had more tea, the host cleans the utensils to put them away but then the first guest will ask the host allow the guests to examine some of the utensils. Each guest  takes his turn. A tea ceremony can last up to four hours.

Next week I’ll be taking a trip around the world to see how different cultures like their tea.