At the beginning of the 18th century almost everyone in Britain drank tea and approximately 11,000 tonnes were imported. However an estimated 6,000 tonnes were being smuggled in, causing a surplus. There was 10,000 tonnes sitting in a London warehouse because the local demand had been exhausted and the American settlers weren’t buying it. To get around paying customs duties, the Americans were smuggling tea from the Netherlands. Unable to sell their tea, the BEIC was 1 million pounds in import duty debts to the government. So, they asked the government to lend them a hand.

The Tea Act granted a government loan of 1.4 million pounds to the BEIC 1.4 million pounds to cover their debts. To pay off the debt the Act enabled the BEIC to ship tea direct from China to America, making the import taxes lower. When the tea arrived to America, it was sold to BEIC agents, who would undercut the smugglers market price. In theory this should have made it easier for the BEIC to offload the tea to the settlers. However, the settlers didn’t take lightly to being interred with.  They boycotted English goods and refused to pay taxes. At the time, the American colonies had a population of 3,000,000.  Many of the settlers were wealthier than the average Englishman. 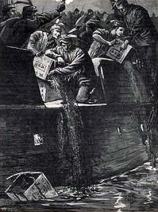 When the tea arrived, the settlers prevented the ships from being unloaded. In Boston, on the 16th of December 1773, a group of settlers, dressed as Mohawk Indians, boarded three ships that were carrying tea. Over a period of three hours they tipped 342 chests of tea into the harbour. This became known as the Boston Tea party. Later there were other “tea parties” held in other ports, in a sign of solidarity. The British government closed Boston harbour until the BEIC were compensated. In 1774, the British government passed a series of laws designed to reassert their power over America which only made the settlers more enraged. The following year the America declared themselves indepeant by setting up their own government.

The advancement of the America Revolution cut off Britain’s supply of Mexican was which was used to pay China for tea. Also during this period the price of silver increased due to inflation. Britain had to find a new source of silver otherwise it would be in debt to China. So they turned to India.

Next week I’ll be looking at one of the darkest chapters in tea’s history and Britain’s undermining of Chinese civilization.

NB:  The books listed before have been used as research for this piece

A History of the World in 6 Glasses by Tom Standage

Green Gold: The Empire of Tea by Alan and Iris Macfarlane